Children with Asthma and Carpets

I found this online and think it makes interesting reading?

If you think carpets are bad for your health, you should read this.

This is a letter sent in response to a recent Channel 4 production titled, ‘How to Beat Your Kid’s Asthma’. The letter raises important facts and issues that everyone who has seen the show should be aware of. The letter was sent by The Carpet Foundation.

I refer to the recent ‘How to Beat Your Kid’s Asthma’ programmes and am disappointed to note that you totally ignored the scientific data that I sent to you before the programmes were screened and concentrated solely on “allergy avoidance” interventions; such interventions having been investigated in the past without any evidence of success.  Following links from the Channel 4 website, in fact, led to the report of one large and authoritative study which showed that allergy avoidance was ineffective.

The programmes commenced with an interesting and objective investigation which showed the children under investigation to be generally allergic to a number of agents.  Why then did the programme concentrate almost exclusively on house dust mite allergen?  The scientist involved took dust samples from a number of indoor surfaces and measured the allergen content.  He reported that the greatest concentrations were in bedding and in furry toys.  Nevertheless, the first action of the Asthma nurse was to point to the carpeting as the principal culprit; no doubt a knee-jerk reaction resulting from out-of-date misinformation on the subject.

There is no doubt that house dust mites can be found in carpets but as reported in the programme they require warm moist surroundings to survive together with a supply of their foodstuff, flakes of dead human skin (dander).  These flakes are too dry and horny to be eaten by dust mites when shed by humans and need to absorb moisture from their surroundings to become digestible.  The moisture content of their food is also said to be the only source of water to the mites.  The warm, moist conditions required are rarely consistently found in carpets, particularly if the advice given in the programme, to ventilate the room, is followed.  Older research has found that beds and bedding are the ideal sites for dust mites to thrive being both warm and moist from the perspiration and exhalations of their occupants.  These occupants spend about a third of their lived in these warm, moist conditions with nose and mouth in intimate contact with the bedding materials from which the allergen particles may be inhaled.

Dust mite populations migrate from bedding to other indoor surfaces, including carpets but it is important to recognise the importance of the three-dimensional carpet structure in suppressing the allergen particles from circulating in the indoor atmosphere.  A review of scientific literature shows:

Ø   Only about 10% of fine particles (including allergen) falling onto a carpet remains on its surface.  The remainder sinks into the pile structure.

Ø   It takes 10 times more air disturbance to stir up the same amount of fine particles from a carpeted surface than from a smooth floor surface.

Ø   On-going research is showing that laminate flooring provides at least as good a host for house dust mite colonies in the cracks and joints between the panels, like carpet.

There are three statistical items that support the claimed benefits of carpeted floors for asthmatics.

I was absolutely delighted to see the considerable health improvements of the children featured in the programme.  However, I am certain that they would also have been achieved with the cleaning and ventilation regime alone.

This site uses Akismet to reduce spam. Learn how your comment data is processed. 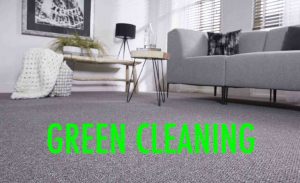 A lot of carpet and upholstery cleaning companies 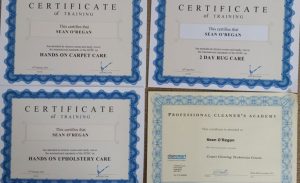 I was speaking to someone recently who asked

We accept Visa and Mastercard